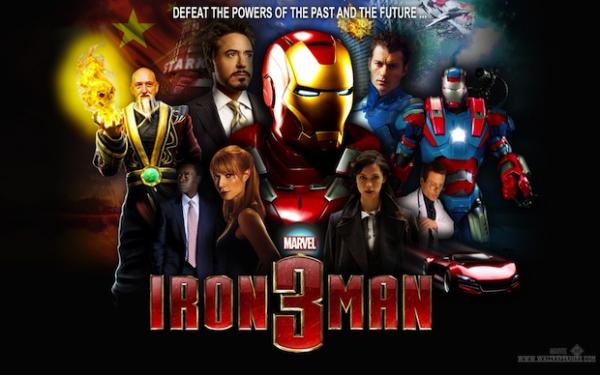 Does the man make the suit? Or does the suit make the man? This is the question which will crawl up your mind while watching Shane Black’s Iron Man 3.  Now Shane Black’s Iron Man is quite different to Jon Favreau’s.  Jon’s Iron Man was more like portrayal of the mind of Iron Man. But I feel Shane’s Iron Man is different. It’s bigger and louder compared to the last two, but then somewhere I was disappointed. The trailer portrayed the movie to be dark and challenging, which is unfortunately nothing like the movie.  The trailer built up to The Mandarin, which completely falls on its face. They made a comedy out of it, which made Sir Kinglsey’s character disappointing. The Mandarin, who was set up in the trailer so awesomely as the main antagonist? He’s just an actor in the movie, a “mascot” for the terrorist group – he didn’t even know he was working for terrorists! Compare that to the comics’ Mandarin who is using alien technology and is Iron Man’s archenemy.

Based on “Extremis” by Warren Ellis, this one had its moments of brilliance. In the two previous movies, we saw Tony Stark build the armor out of nothing, and with better armor etc. But here Tony is out of everything. And he has to fight the Mandarin with all his wits, and his resourcefulness.  A hero is only as good as his nemesis. Here, we finally see the Mandarin, Iron Man’s longtime enemy from the comics. They have been hinting at him since the first movie, with the terrorist group calling itself the Ten Rings. In “Iron Man 3”, the Mandarin is indeed wearing 10 rings, but they don’t seem to be the source of his power.  Then there’s Aldrich Killian(Guy Pearce), Killian is yet another villain of Stark’s making. The film serves up plenty of spectacle – explosions, chases and brilliantly choreographed fight scenes. Pepper Potts finally gets something more than her usual role proving to be the perfect match for Stark. And yes she finally gets the suit. Gwyneth Paltrow and Rebecca Hall certainly add more to the characters. Don Cheadle is impressive as James Rhodes/Iron Patriot but he would done with a bit more part in the destruction.

Robert Downey Jr. is forever brilliant as Tony Stark and he explores more of the character. The idea of digging deeper into Tony Starks psychological problems attracted me, but theythen just lost it. Stark gets “panic attack”s which are a reaction to the “horrible” events from the ending of The Avengers, but then that’s it. What more? For the villains, Ben Kingsley has been wasted and Guy Pearce is the only other good thing with a punching performance. Consistent with Black’s prior films, the dialogues are hilarious, heroes very human, flawed, and these characteristics make their actions heroic indeed. Use of technology & CGI for the IRON MAN suits was good. 40 different Iron Man suits with some of the iconic ones such as the “Hulkbuster” suit also was shown for a split second running under something, getting stuck and then lifting it with its back. A little bit more of that would have been much more fun. The rapport between Stark and Harley, the young kid he meets (Ty Simpson), who will not only enable him to overcome his PTSD but also become an unlikely pre-pubescent sidekick significantly enlivens the film.

Weak on plot and editing but then does anybody care? The story could have been better. Even the post credit scene was a disappointing. Storyline is a bit weak. And there is no ACDC in the background! Also they hinted that the franchise is putting it on hold by getting the arc reactor out of Tony and with Paltrow hinting in her interviews that there might not be anymore Iron Man movies.  The last shot of Stark beginning a new phase in his life bodes well for the future of the franchise, especially if it is to continue its life outside of ‘The Avengers’.

Black proves the perfect guy with smart new tech and scenarios for the super-genius. If this does turn out to be Downey Jr.’s final solo outing, it’s a very strong exit. Although this film has its flaws, it won’t stop you from thoroughly enjoying the ride. Go and See Iron Man 3

Proud to be an Indiblogger